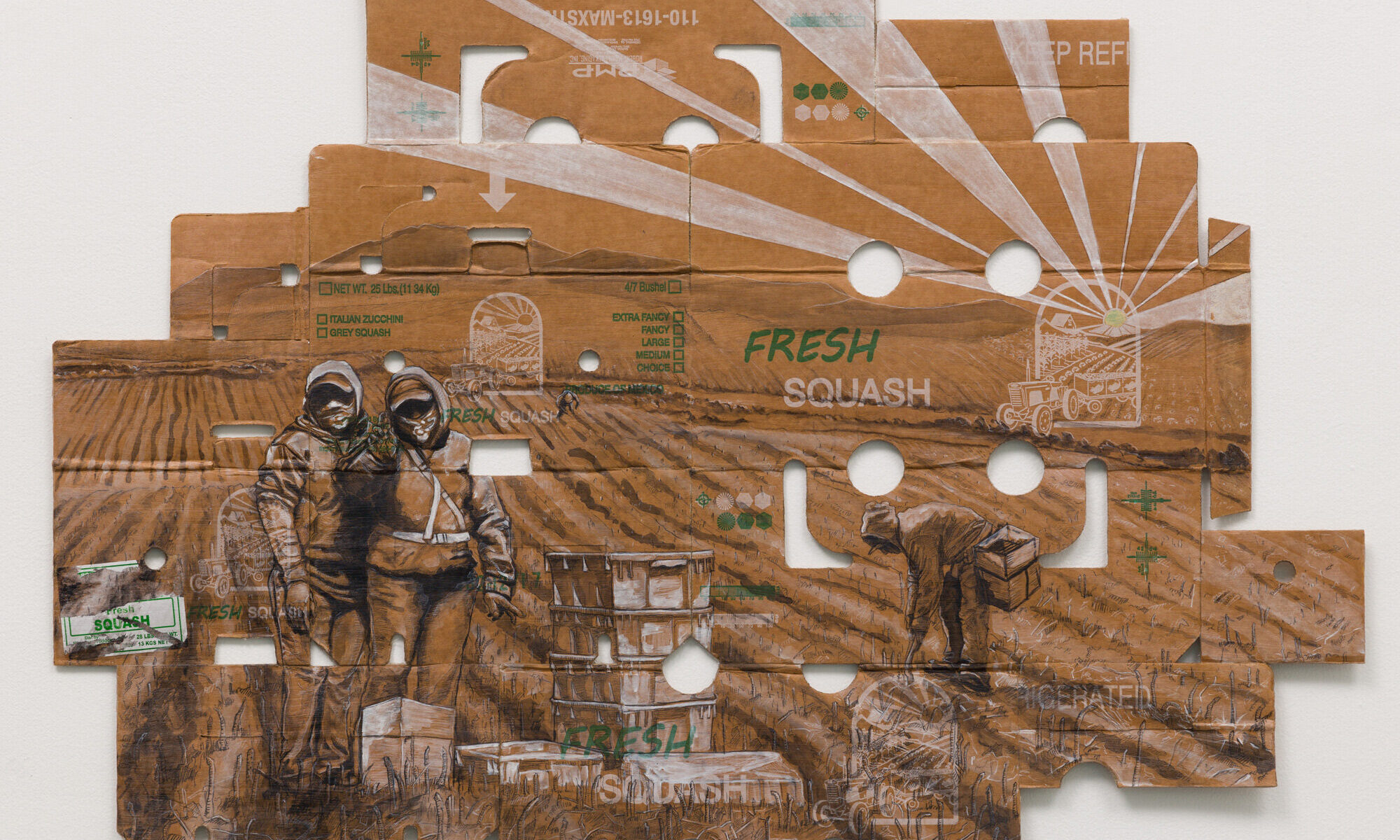 As a child growing up in Oaxaca, my connection to the agricultural fields had a profound effect. “A Declaration of Social, Political and Aesthetic Principles” from 1922 by Siqueiros takes on the issues that I have been working with. In this piece, Siqueiros critiques the system that oppresses farmworkers comparing and contrasting the poor workers and the rich. I conceived of a project that involved a non-traditional collaborative with industrial printers. Echoing Siqueiros ideas about socio political art, I attempted to start a dialog with the food industry by contrasting the agribusiness with its laborers. I chose agricultural workers and drew portraits of them, some on linen canvas, and others on reclaimed produce cardboard boxes. I aim to contrast the disparities of lifestyles between workers and owners through the usage of symbols from the boxes and my own mark makings. – Narsiso Martinez

Narsiso Martinez’s paintings and mixed media installations include individual portraits and multi- figure compositions of farm laborers set against agricultural landscapes and the branding designs of commercial growers. Drawn from his own experience as a farm worker, Martinez’s work focuses on the people performing the labors necessary to fill grocery stores and restaurant kitchens around the country. His portraits of farm workers are created on discarded produce boxes in a style informed by Social Realism. Martinez’s work makes visible the difficult labor and onerous working conditions of farm workers in America.

Narsiso Martinez was born in Oaxaca, Mexico and migrated to the United States when he was 20 years old. He attended Evans Community Adult School and completed high school in 2006 at the age of 29. To finance his education, Martinez worked seasonally in the apple orchards of Eastern Washington for nine years. He earned an Associate of Arts degree in 2009 from Los Angeles City College. In the fall of 2012, Martinez earned his Bachelor of Fine Arts from California State University Long Beach. In the spring of 2018, he received a Master of Fine Arts degree in drawing and painting from California State University Long Beach and was awarded the prestigious Dedalus Foundation MFA Fellowship in Painting and Sculpture. His work has been exhibited both nationally and internationally. He is currently part of a major exhibition at the Smithsonian’s National Portrait Gallery in The Outwin 2022: American Portraiture Today, and is featured in a solo show, Rethinking Essential, at the Museum of Latin American Art. Martinez’s work is in the permanent collections of the Long Beach Museum of Art, the Crocker Art Museum, the Jordan Schnitzer Museum at the University of Oregon, and the Santa Barbara Museum, among others. Narsiso Martinez lives and works in Long Beach, CA.